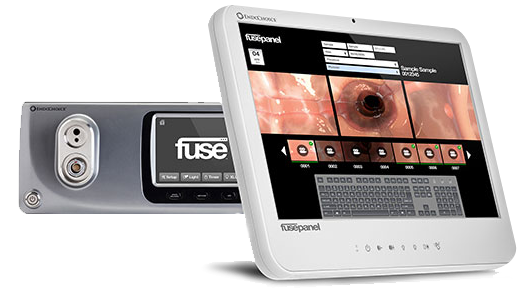 What is Fuse Endoscopy?

In a recent study, published in The Lancet Oncology, the Fuse endoscope found 69% more pre-cancerous lesions than the standard, forward-viewing colonoscopes. Finding and treating more adenomas means that we can bring a higher quality of care to our patients by potentially reducing the risk of colorectal cancer.

While colonoscopy exams prevent many colon cancer deaths and are considered the most sensitive method for detection, colorectal cancer is still the third leading cause of cancer-related deaths in the United States when men and women are considered separately, and the second leading cause when both sexes are combined. It is expected to cause about 50,830 deaths during 2013. At The GI Guy, we are doing what we can to decrease that number.

Kurt Vernon, MD, known as “The GI Guy”, is now offering a new type of endoscope that will detect a significantly higher number of potentially pre-cancerous lesions (adenomas) during a colonoscopy.

Fuse is unique in that it gives endoscopists a wide, 330 degree view, while standard, forward-viewing endoscopes only provide up to 170 degrees of forward vision. Fuse overcomes the limitations of standard, forward-viewing endoscopes and allows endoscopists to see almost twice the anatomy, thus detecting a higher number of potentially pre-cancerous lesions.

Our Goal is to exceed your expectations by providing exceptional care before, during, and after your visit with our office. We care for patients from around the state from our two office locations in Fuquay-Varina and Dunn, NC.

Our practice approaches patient care from a global perspective. To achieve the best and lasting outcomes we provide education, incorporate nutrition, lifestyle, and use the best quality products.

Are You At Risk?

Gastrointestinal problems account for more hospitalizations in the U.S. than any other group of disorders. Take our quick colon cancer quiz to see if you may be at risk.

Testing for colon cancer just got easier. If you don’t already know, Cologuard is a new competing technology for colon cancer screening that is simple and ease of use. It involves no prep, no sedation, and most importantly, its effective. What exactly is Cologuard? Cologuard is a cancer detection test. Specifically, it tests for genetic Read More…

The practice of Kurt Vernon, MD, The GI Guy, is proud to announce that we have received a ‘Tier 1 Designation”, a high quality recognition from one of the nation’s largest health insurers – Blue Cross Blue Shield of NC.  BCBSNC Tiered Network utilizes administrative claims data to identify high quality, low cost providers and Read More…